I apologise if this entry is a little brief, but it’s the ten turns where things really stagnated for me. Things went from bad to non-existent, in a way that I hadn’t really anticipated. Maybe I messed up with the threat levels, or, as becomes increasingly apparent, when I first created my avatar. Here are the turns so far from the other guys, if you’ve missed them:

For the past twenty-ish turns, Speedo Demon has been slowly growing in power. It’s not really due to a huge military power, or any particularly clever diplomatic movements, but mainly because of this big Minotaur chap he’s got called Haagenti. I’m not sure if he started out stronger than Orias, but the way he’s been winning fights left and right means he’s surely far beyond my powers by now. Or at least he’s going to be if he carries on as he is. So I figure this is the last chance I’m going to have to take him on, beyond he’s completely out of my reach.

So that means I’m going to have to insult Speedo.

Neither of us have our fighting praetors on the map, opting to keep them held in our vault to keep them away from stealing hands. What this also does is means we can’t check each other’s stats out. Obviously this is an issue when going into a fight, because if you do know those stats, you can shape your fight around it. Because I have little to no idea how this guy even operates, I’ve got to create a strategy that caters to everything, which makes it universally weak at the same time. Or, I try and second guess, him and if I fail I’m just as dead.

My plan of creating a super powerful praetor to threaten everyone with has failed pretty much completely with the rise of Speedo’s champion, so my only other option is creating a powerful military force. It’s becoming more and more apparent that people are avoiding sending insults at one another, because to do so you need to be utterly assured of your dominance. You need to know you’ve got a better praetor and a better military force. If you are inferior in either of those things, then you’re going to get called out. So everyone’s sending around demands, in the hope that someone’s going to run out of tribute to hand out.

My main problem here is that I’m a marquis. Everyone else in the game is above the infernal level of Duke, with most of them being princes. This is a huge problem, because in the infernal hierarchy, it’s bloody hard for a Prince to take a demand from a Marquis seroiusly. They’ll just laugh them out the room and make jokes about how they’ve only got a dozen concubines, rather than a whole city of moaning virgins. To call me an underdog would perhaps be an understatement. I’m the runt of the litter in more ways than one.

My other main problem is I’ve got bugger-all prestige. I was really, really screwed over by my starting position, and even getting the Gates of Hell was a difficult thing to pull off. I need to start winning fights and getting places of power, or I’m going to be completely out of the runnings. The only person even close to my prestige level is Kieron, and he seems to be fighting three wars at once. Really, I need to pull my finger out of whatever orifices huge Horse-headed archfiends have, and do something.

But I can’t be unprepared, which means I need to raise my stats and carry on buying the best items from the bazaar. I may suck in pretty much every other aspect, but I’ve got tribute coming out of my ears, to the extent where I can easily level up my Martial Skill attribute by one point a turn for the next few, which should let me become a little more of a sure thing in a fight. Combat cards can be brutal. 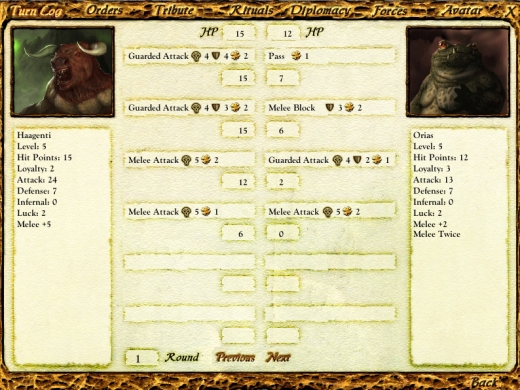 Eugh, I was too late. Orias was completely dominated by Haagenti, to the point where the fight only lasted to the fourth round. The guy has 24 fucking attack points. To put that in perspective, when I got Orias he started off with twelve, and after levelling up he ended up with fifteen. Even giving Haagenti benefit of the doubt and saying he started at fifteen, that means he’s levelled up three times, which is insane. The guy just isn’t fair. And, with another victory under his belt, I doubt anyone can even come close to taking him out for the rest of the game. There goes the neighbourhood.

I am Martial Skill level three now, though, which means I can create some pretty hefty combat cards to attach to my legions on the eve of battle, which should allow me to win most fights, what with my main legion wonderfully powerful now. Oh, and it’s about time I picked up something to boost their one flagging stat, Infernal, so I’ve picked up the Rod of Hauspex, which has the nice little side effect of making all Infernal damage permanent. Which is a horrific thing to have happen to a unit.

After a turn of gathering resources and beefing my units up a bit, it’s time to get on the offensive. I’m going to spread myself as thin as I can, just in the hope that someone, anyone, will bite. I’ve got a clearly powerful military force, even without showing my martial skills by attaching the combat cards, which means I need to make demands of everyone I possibly can. And that means Scrofula and Speedo.

Which brings me back to the fucking Marquis thing again. Demands are a balancing act; when answering them, you have to figure out how likely the enemy is to complete their vendetta, and then add in the cost of the demand they’re asking; if it’s only a few tribute cards, it’s probably easiest to just concede. If it’s a whole load, and you’re running low, it could be better to risk the war.

Because of my status/prestige, the most tribute I can demand off Speedo is one tribute card. ONE!

One tribute is nothing. It’s sofa change, the stuff you find hiding behind your other cards that you’d entirely forgotten about. No one is going to fight a war over one tribute card. It’d be like hanging someone for looking at you funny. Unless it’s a guaranteed win, you’re not going to refuse the demand. And he knows he can’t beat me in a legion fight. Bollocks.

I’m impotent. Nothing I can do at all because everyone is too powerful for me to do anything to. I’ve not got the time to build up deceit or anything so I can start doing vindictive, spiteful damage, and I need to be in a vendetta to do anything with all my useless power. I’m told that Solium Infernum games rarely last past turn 50, so it’s about time I did something about this. At the moment, I’m in dead last.

I insult Kieron for good measure, and then set my plan into motion, which is horribly, pride-swallowing simple.

Second place is better than everyone else. Except first place. And if I’m chummy with first place, maybe he won’t chuck me into the abyss when all this is over.

So I look at the way things are looking. And they’re looking like this:

That’s me at the top, looking like an angry pony, and as completely feckless as one. At the moment it’s looking like a fight for first between Quinns and Speedo, with Scrofula coming up for third place. And I fucking hate Speedo. He killed Orias. And after all our fighting, I doubt Scrofula wants anything to do with me, unless it involves searing flesh and revenge. So that leaves Quinns, who I’ve all but left alone for the entire game. I guess it could be worse.

My ‘plan’, if you want to call it that (I call it ‘conceding defeat and bitching up’), is to offer myself as a Blood Vassal to Quinns. Basically this strips me of all Diplomatic power (yeah, like I had any anyway), and turns me into his obedient guard dog, happy to sink my teeth into whoever he fights. I turn from Boss to Muscle, essentially.

Except there’s a problem. I’ve easily got less than half his prestige, but to become Blood Vassal I need to have half his land, too. And after the recent foray into Scrofula’s land, I’ve actually got quite a lot of it. So before I submit, first I’ve got to supplicate.

Kieron accepts my insult, which is annoying, as I want that Wheel. It doesn’t matter though, as I’ve got one last diplomatic thing to do before I lose all my rights. 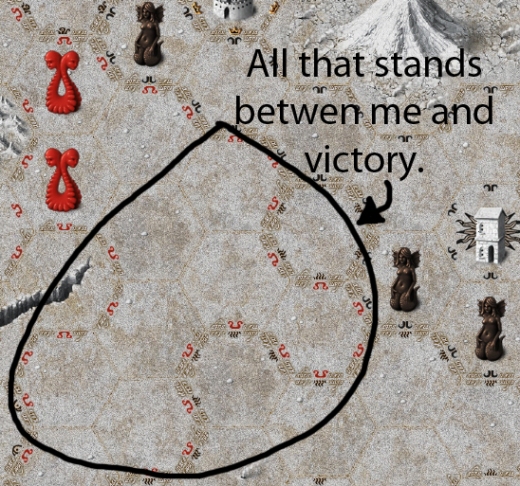 I’ve actually got more land than Quinns. Which means that becoming a Blood Vassal is all but out of the question. The only way we can do it is if I lose a huge chunk of land and he gains a huge chunk. Which is kind of handy, as it means that I don’t have to give it to anyone else. When we join, what’s his becomes mine.

So I insult him, and now he’s in a position to take all my useless cantons. And then things are going to get less interesting for me, but a hell of a lot more interesting for the game. I’ve just got to make sure he wins the game, and I’ll automagically get second place. Which’d be better than last. Or dead.

I've graduated, had a look at the world, and spat. Now I'm devoting my time to moving from 3/4 of a games journalist to 9/10ths. I figure I can get away with 9/10ths.
View all posts by Phill Cameron →
This entry was posted in Games and tagged Fucking Speedo, game diary, ORIAS, Quinn's Wife, solium infernum. Bookmark the permalink.

8 Responses to To Reign in Hell – Part 5